Four Sections of the Berlin Wall “Kings of Freedom” owned by Robert & MeiLi Hefner, are now on display at Bedok Reservoir in Singapore

Four sections of the Berlin Wall entitled “Kings of Freedom” were unveiled at the University of Virginia on Friday, April 11, 2014 and is open for public viewing near the Alderman Library and the Albert and Shirley Small Special Collections Library at the university campus in Charlottesville. The sections are on loan to UVa by MeiLi and Robert A. Hefner III, owners of Ramiiisol Vineyards. On November 9, 2014 a remembrance ceremony was held onsite at the installation of the “Kings of Freedom” at UVa with remarks made by Robert A. Hefner III and then President Teresa Sullivan. The installation has been an inspiration to the community of Charlottesville through the programs affiliated with the university such as the Alzheimer’s Association and Writer’s Eye literary competition in which the “Kings of Freedom” are featured in the 2016 Anthology.

Mr. Hefner, sensing the long-term magnitude of human change and historical enormity of the people of East and West Germany tearing down the Berlin Wall, sent a representative to Berlin to negotiate for a substantial section of the Wall, as he believed it to be an icon of the “power of personal freedom”. Measuring sixteen feet in length and twelve feet tall, these sections contain two murals by the graffiti artist Dennis Kaun; painted on the West German side is a brightly colored, joyful king, representing freedom, and a largely colorless, blindfolded king, oblivious to the needs and wishes of the people.

The East German side remains dull gray cement. The Hefners believe these two sides, the colorful, lively West German side, and the gray East German side, artistically represent the character of freedom and enslavement. As Hefner says, these pieces of the Wall represent a great monument to the “power of personal freedom”, clearly symbolized by the fact that President Reagan came to the Wall in 1987 and said, “Mr. Gorbachev, tear down this Wall!” But neither Reagan nor Gorbachev, the world’s most powerful leaders, could tear down the Wall but, the people, exercising their free will, could and did. Thus, the “power of personal freedom”.

West German graffiti artist Dennis Kaun created his Pop murals on the West side of the Berlin Wall using spray paint.  Dennis Kaun says that altogether it took six hours over two sessions to create the murals he entitled, “Kings of Freedom”. Every graffiti artist has their own unique style and signature. Over a period of years, Dennis Kaun became known for the art he created on the Berlin Wall and ultimately, he was invited to participate in international graffiti painting contests.

The “Kings of Freedom” murals have traveled across the globe and have been on display at; the Kirkpatrick Center in Oklahoma City, the Aspen Art Museum in Aspen Colorado, the Oklahoma City Omniplex, Bedok Reservoir in the Republic of Singapore, and the University of Virginia in Charlottesville, Va. 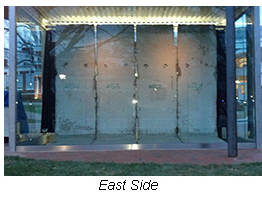 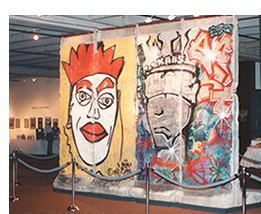 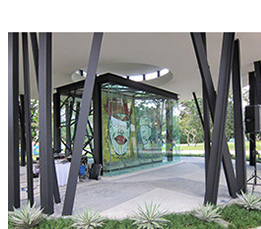